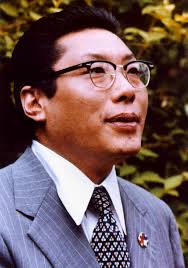 The Tibetan teacher, Chögyam Trungpa Rinpoche (1939-1987), was a pioneer in establishing Buddhism in the West.  In addition to founding meditation centres in Europe, the USA and Canada, he also founded Naropa University in Boulder Colorado, and created a programme in Contemplative Psychology.

As Trungpa Rinpoche began teaching in Western countries, he quickly realized that the language of psychology allowed him to transmit the essence of Buddhism to Western students. He included terms from Western Psychology in his presentation of Buddhist teachings. At a time when meditation was still regarded as something esoteric or religious, he used words such as “ego”, “neurosis”, “fear”, “depression” and “unconscious mental patterns.”

In close collaboration with Trungpa Rinpoche, Ed Podvoll and a number of Naropa Graduates founded the Windhorse Programme—Contemplative Psychology for caring for psychotic patients. Windhorse Programmes have grown and continue to be offered in Europe and North America.

Melissa Moore and Irini Rockwell, who had both been teaching extensively in North America and Europe, shared an interest in creating a Contemplative Psychotherapy/Psychology training in Europe. They developed a curriculum modelled on the Contemplative Psychology Masters program at Naropa University in Boulder, Colorado. Hubert Backes, Elisabeth Fey, Dagmar Niehaus, Gabi Gokert and Angelika Schulz, who had a psychotherapeutic practice in Bielefeld, Germany, became the Board.

In 1996 Melissa Moore, Phd, who had been trained at Naropa University met with a group of German psychologists and psychotherapists and with a few other collaborators, presented a training in Contemplative Psychology for professionals working in the fields of therapy, healthcare and medicine. This accredited training has been offered in Germany for the past 10 years for licensed professionals, and has now also expanded to Austria, France, Netherlands, Spain, Poland, Sweden, North America and now the UK. Please find more information on Karuna Training in Europe here.

Mindfulness in the Therapeutic Context

The last fifteen years has seen an explosion in research into the benefits of mindfulness in the therapeutic context. The work of Contemplative Psychology – for a long time, a small isolated movement – is becoming mainstream practice. We are delighted to have been part of this journey and are deepening our collaboration with researchers in the fields of mindfulness and compassion.

We have no workshops currently scheduled. To hear about new workshop dates, please join our mailing list below.